Eight days and counting…and after a slow start, I reached the point of excitement.  Please don’t think that I’m not and haven’t been looking forward to my Copperstate return; I really, really have.  However, this year’s preparations seemed to be far less complicated, and as a result, less worrisome.

My mechanical cousin continued to avoid work related conflicts, as this morning’s email confirmed – “On the LHR tarmac, waiting for doors to close”.  I’m ignoring the fact he may have accidentally wandered onto a long haul to Australia, or an equally geographically undesirable charter to Dubai (directionally challenged being a shared family trait); instead opting for the positive outlook that I’ll see his happy, smiling face as expected when the plane reaches sunny California.  Toolkit, fire extinguisher, GoPro, sharp pencils, go-faster t-shirts all located and ready for action. And hints from the Copperstate  organizers regarding our route are already guaranteeing as much, if not waaaayyyyy more driving fun than last year. 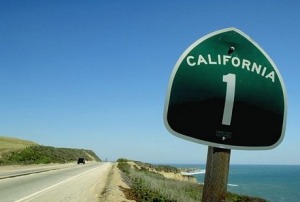 Of course, pre-rally organization has not been without a few moments of panic.  Last weekend included plans to take the Egg out for a back roads cruise out to Ojai.  Thwarted slightly by unexpected issues related to the neighbour’s dog, my final trip ended up being a little closer to home.  134 to the 210, back and then down the 5…The Egg was singing.  Los Feliz to Hollywood, still sounding sexy.  Down La Cienega, blushing at the number of thumbs up and compliments and then enjoying a quick chase from a Maserati into Beverly Hills – a perfect Sunday afternoon.

And then she burped, spluttered, and seemed to be running on one carburetor (not that successfully).  We limped home, sunglasses on to ensure limited attention from the paparazzi; and I delivered her to Markham Motors on Tuesday.  After a couple of days, Doctor Markham called with an update.  One replaced fuel pump, a few screws tightened, all other safety issues checked and the Egg was released with a clean bill of health.  Weather this weekend is inevitably perfect (this is California, after all) so we’ll find a pre-race route to play around on before packing her up and shipping her off…